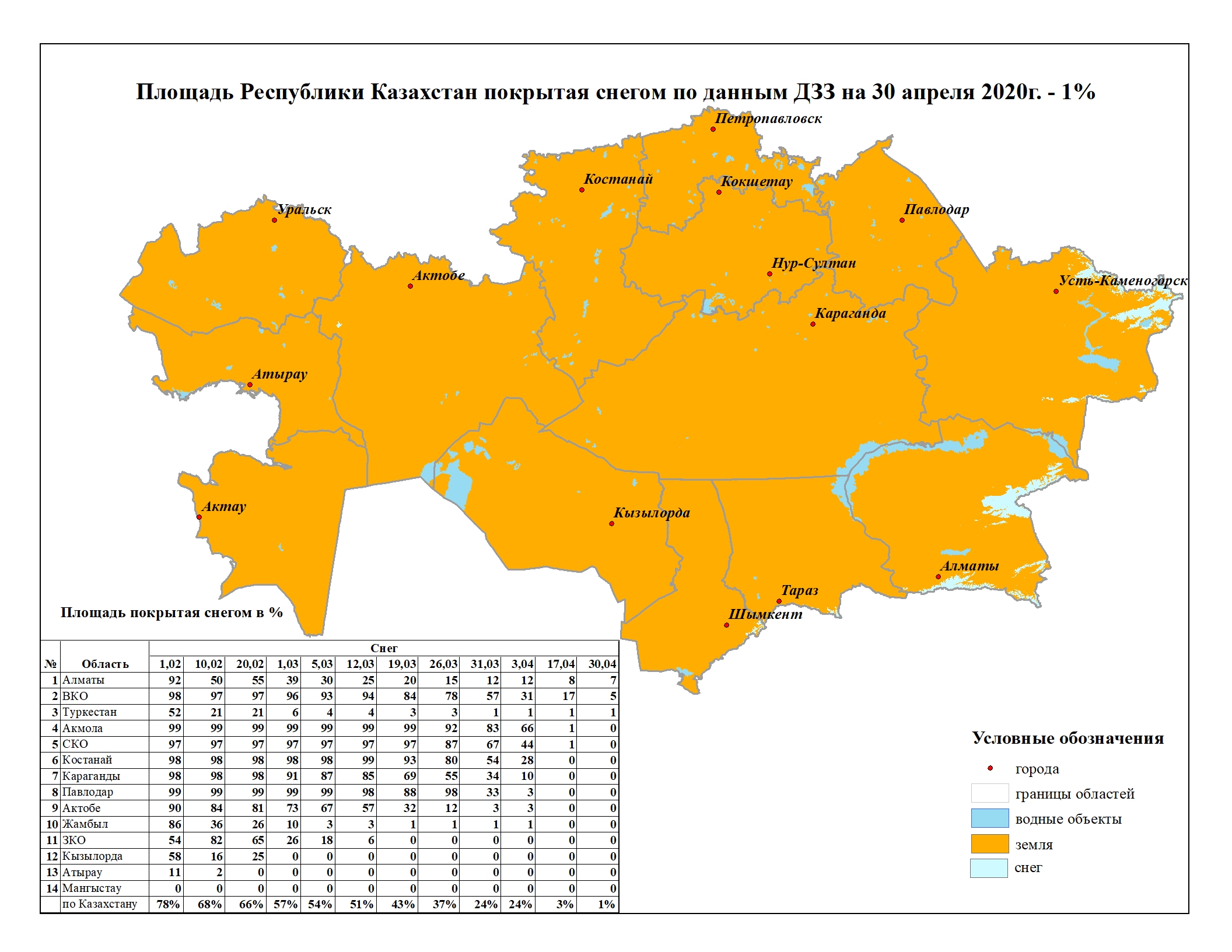 In West Kazakhstan, Aktobe, Atyrau, Kostanay and Karaganda regions the peaks of the spring flood passed. Further water content of the rivers Zhaik and the Kigach (Atyrau region), Ayat and Tobol (Kostanay region) will depend on the operating mode hydraulic structures located in rivers on the territory of the Russian Federation.

In Zhambyl, Turkestan, East Kazakhstan and Almaty oblasts further, the water content of the rivers will depend on the intensity of snow melting in the mountains (up to 2000 m) and high altitude (over 2000 meters), depending on temperature and deposition of heavy rains.

On transboundary rivers of the Syrdarya in Kyzylorda and Turkestan regions, Shu and Talas in of Zhambyl region the water content, the proportion of runoff, limit intake of Kazakhstan will be determined by agreement between the authorized state bodies in the sphere of water resources management at the intergovernmental joint commissions.

On the rivers Akmola the peak of the spring flood passed, it is expected fluctuations in the levels of rivers Nura and Ishim through waves seeking the upper reaches of the rivers.

In North Kazakhstan and East Kazakhstan regions the flooding period will continue until the 1 decade of may.

SYNOPTIC forecast in the Republic of Kazakhstan on may 2-8, 2020

In the early period most of the territory of Kazakhstan will be under the influence of the cyclone were from the districts of Moscow – rain is expected with thunderstorms, gusty wind, hail events in the South – with a flurry on the East, South and South-East will be strong rains. In this regard, mountain and foothill regions of Eastern Kazakhstan, Almaty, Turkestan and Jambyl regions are expected to the formation of slope runoff and downs of water levels in the rivers.

In the middle period, from the island of Novaya Zemlya in Kazakhstan will spread the cold anticyclone, which is expected cessation of precipitation and a temperature drop at night to negative values. At the end of the period the outflow of warm air masses from the South is expected to increase the background temperature  (Appendix 1).

- along the river Esil and R. Ironbulluk inflow in sergeevskoye reservoir. (for transects GP Toxin bi and Sokolovka) in the amount of 170-250 million m3.

Hydrological forecast for the growing season 2020.

Preliminary Advisory hydrological forecast as of 01.02.2020

Weekly hydrological forecast from 24 April to 1 may 2020

The final hydrological forecast on may 1, 2020